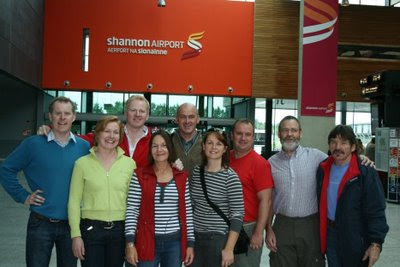 In Shannon Airport before being joined by Tom - Thomas, Marcella, Darren, Breda, John, Clare, Philip, me and Mike.
Left Shannon at 13:05 compliments of Michael O'Leary. John's wife, Mary Coll had arranged a 16 seater mini-bus to transfer us to Dover but 40 minutes after leaving Gatwick the bus broke down when the cooling fan disintegrated. 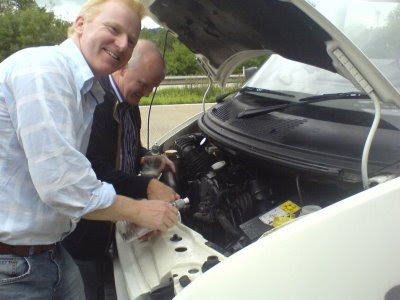 Darren and Tom pretending to be mechanics investigate the broken fan!
After sitting on the hard shoulder of the M20 for an hour and 20 minutes, a replacement mini-bus (six seater) and an AA rescue truck (with crew-cab) took us and our broken-down mini-bus to our destination. 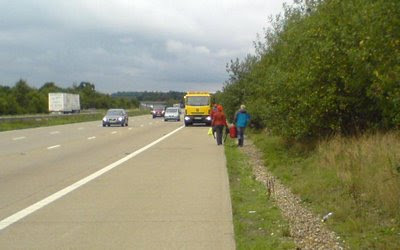 Darren and Clare walk towards the AA Rescue truck on the hard-shoulder of the M20.
Across the road from Varne Ridge Holiday Park, the White Cliffs of Dover fall away steeply to the sea and when we arrived you could just make out the coast of France so we had to take some photos. 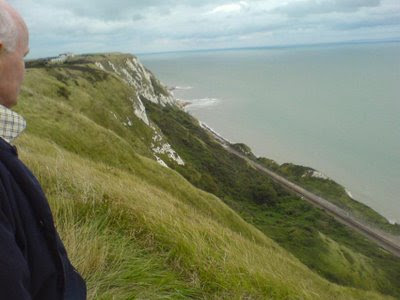 Tom looking out over the Channel to France from the top of the cliffs across the road from the mobile home park (Varne Ridge).
After making contact with the boat skippers Darren announced that we have an available swim-slot at 13:00 tomorrow (Monday 8th) for both boats.

We started our open-water swimming in June with a trial-run for the Thomond Swim which is 2000 metres from Barringtons Pier to Shannon Rowing Club and then completed that swim as a race on July 4th. A miserable evening, lots of rain and a force 6 North-Easterly wind but we're tough. Tom Moloney was the only member of our squad to swim the Corrib Swim on July 12th as well as the 5K in Dublin Bay (Tom reckons that the 2 hours it took reflects the extra distance that he swam due to a badly marked course) on July 26th and I was the only one to take on the Lee Swim on July 19th.
On Saturday August 2nd we staged a 12 hour swimathon in Kilkee and used this event both as a fundraiser for our newly nominated charity-of-choice - Muscular Dystrophy Ireland (MDI) - as well as an endurance training event as we completed what we hoped would be 75% of our Channel Swim - one hour swimming followed by three hours rest, repeated 3 times and thankfully we all survived. A note of thanks here to all of the other members of Limerick Masters who joined us for the 12 hours thus ensuring that we surpassed out target distance of 250 miles.
The annual Kilkee Bay Swim was our next training event and although this did not happen on Saturday August 16th as planned - strong Westerly winds caused so much chop that the Kilkee Marine Rescue organisers determined that it was unsafe - but we successfully ran it on Sunday 17th.
Since then we have completed three one hour swims in the headrace (two of them in the past week during which the water temperature was only 13 degrees) and countless hours of pool swimming which hopefully has provided us with sufficient levels of fitness to take on the Channel. We'll see.
Posted by Ennis Swimmer at 1:50 PM