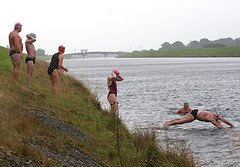 That's me diving in, John Battles already in the water and Marcella, Breda, Tom and Philip getting ready to follow me!
Today we swam our last practice session. As with most of our open-water sessions, today's was in the headrace at Ardnacrusha. Like most of the so-called summer, it was raining. Once you get in the water it doesn't matter in the least if it is raining but when getting to the waters edge involves srcrambling up the grassy slope of the headrace canal (25 feet high at an incline of 70%) and then jogging the 200 metres to the nearest steps (being careful to avoid the sheep-shit), it matters a lot.

Today's jog was recorded by Sean Curtin, a photographer from the Irish Independent, (our group consisted of Breda, Marcella, Tom, John, Philip and me and we were joined for the session by Diarmuid O'Hanrahan - Darren was missing again) 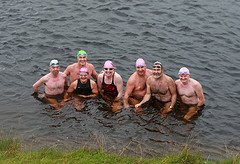 From left to right - Diarmuid, John, Breda, Marcella, Philip, Me and Tom.

- they plan to publicise our channel attempt on Monday.

In July 2007, Breda Mc asked me if I would be interested in joining a relay swim of the English Channel in September 2008. Without hesitation I agreed and since then most of my swimming has been focussed on that event.

Once in the water, rain is the least of our problems as we swim for 40 minutes against the current and then try to get back to the steps in 20 minutes. Today we were too eager (a reflection perhaps of how cold the water was) and made it back to the steps in less than 17 minutes giving us 57 minutes in the water. That is a luxury that we will not have in the channel where the rules stipulate that each member of a relay team must swim for 60 minutes before he or she can return to the boat.

Looking forward to seeing those photos in Monday's paper...