From Dover port we made our way through increasingly choppy seas to Shakespeare Beach from where all official swims start. The rules are quite explicit - the first swimmer of each relay team leaves the boat at a distance from the beach where the boat's skipper believes the depth of water is sufficiently safe (for the boat), each swimmer advances beyond the tide-line by a distance of at least 4 feet and when ready to swim, raises one hand above the head as a signal to the observer that the swimmer is ready to start.
We had previously decided on our teams when Darren announced after one of the training sessions in the headrace (the only one that Darren attended) that himself, his brother Thomas, Philip Mudge and Tom Moloney should make up one team under his captaincy and that Breda, Marcella, John Battles and I make up the second team under Breda's captaincy. Once the teams were agreed, a new rivalry became the outlet for the banter and ball-hopping that seems to be endemic among the group. This rivalry is typified by the banter that took place while we were having breakfast that morning which prompted me to compose the following:

Chaplins of Church Street in Dover,
Breakfast outside in the sun,
Gear has been stowed in the power-boats,
As we swim the Channel for fun.

The call came last night before dinner,
The boats would be ready at one,
The banter was bounced round the table,
As we swim the Channel for fun,

The two teams pretend to be friendly,
No need for a race to be run,
To get to the far side together,
As we swim the Channel for fun. 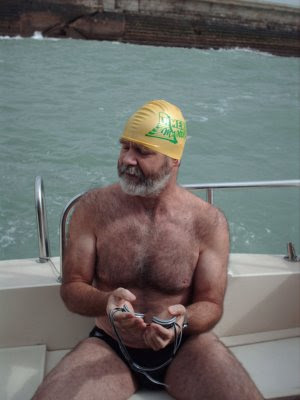 Me in my final moments of concentration in preparation for the plunge (thanks Mike). 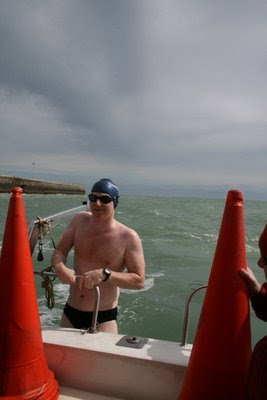 Darren gets ready to go.
At 13.37 on September 8th, I raised my left hand above my head (briefly) and dashed into the sea to be followed by Darren (several seconds later) after he had waited for an acknowledgement from his boat. Darren soon proved to be the stronger swimmer and in spite of a raging sea had pulled ahead by at least 200 metres after an hour of swimming. Darren's team were never to give up that lead and when Thomas Quinn took over from Darren, he stretched the lead against our second swimmer, John. Philip and Tom Moloney swam third and fourth for Darren's team and Marcella and Breda swam third and fourth for us. Mike McNamara (Breda's husband) was our team manager and Clare Collins (Darren's girlfriend) was Darren's team's manager. 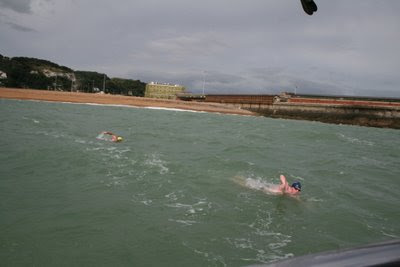 Darren opens up a lead
About 20 minutes into my swim, I realised that in my haste to get started, I had forgotten to apply Vaseline to my underarms with the result that by the end of that first hour I had quite bad friction burns under both arms. However, this pain and suffering was nothing to what greeted my return to the boat where Mike, John and Marcella had all succumbed to sea-sickness and although Breda and I avoided puking, we were not readily disposed to consuming the vast number of calories needed to sustain cross-channel swimming. The end result of this situation was that personally, I was miserable during my second hour of swimming, John Battles was very dissatisfied with the quality of his swimming and Marcella and Breda struggled to perform at their best.

The situation did improve as the crossing progressed and by the time that Marcella got into the water for her second hour, the wind had decreased considerably and accordingly there was far less chop. At 19:37 however, dusk was quickly approaching and Marcella was the first to be equipped with light-sticks.
The weather had improved sufficiently at that stage that I had found my sea-legs and was able to eat a portion of Pot-Noodles while Marcella was in the water. In spite of taking the medication (Sea-Legs!), however, John had still not adapted to the motion of the boat and between swims was able only to sit outside, wrapped in a survival-bag and sleeping-bag, clutching the side of the boat to prevent himself from falling off his perch and gratefully accepting the cups of sweet tea that he was offered from time to time. But occassionally he relaxed his grip on the side of the boat and over the space of several hours fell off his perch three times, hitting the deck with a loud bang each time. One of those times he had half a mug of tea in one hand and a ginger-nut biscuit in the hand that was supposed to be holding on when a sudden roll uncermoniously dumped him on the deck but not a drop of the tea was spilled.
My third hour was my best swim. The sea was by then flat calm, total darkness had descended, the moon was dipping towards the sea in the western sky and my swimming came together wonderfully. For 35 minutes. At that stage I was tired, sore and getting colder by the minute (even though the water was a balmy 15 degrees). During the final ten minutes of that hour I perked-up considerably (at the prospect of getting warm again) but the 15 minutes in between was torture. 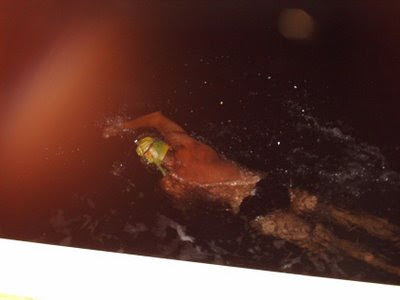 Me swimming my ass of during my fourth hour. My light-stick can be seen dangling from my goggle-strap having worked its way loose. The white in the foreground is the side of the boat.
After warming up (a slow process that took most of an hour) and eating (more Pot-Noodles), I discussed our progress with our Skipper, Dave Whyte and came to the conclusion that if I swam my ass off during my fourth hour we just might reach the French shore. In spite of my optimism though, my stroke faltered again at 35 minutes and combined with local currents my hour in the water got us no closer to France. John fared no better during his fourth hour (which he also found torturous) but Marcella came to the rescue and swam so well during her fourth hour that Breda was left with only a 12 minute swim to land at Sangatte Belfry at 04:49. We had done it!
Marcella and I joined Breda for the final 200 metres (John was completely incapable of getting back into swimming togs at that stage), being careful not to touch her or to swim past her (the rules!) and whooped with delight when we joined her on the shore.
When we swam back out to the waiting boat, the pain and misery of the previous 15 hours was forgotten as we realised that we had gotten our names into the history books - we had joined the small number of people who have conquered the Everest of Swimming. We also found out when we got back to the boat that Darren's team had made land-fall 25 minutes before us during Philips fourth hour.
During the three hour cruise back to Dover, the sun rose spectacularly over France, our skipper, Dave, presented us with the chart of our swim and we caught up with the other boat overtaking them on the final approach to the marina. 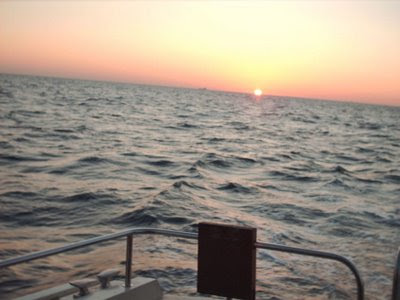 Tired but elated - Marcella, John, Breda and I relax on the way back. 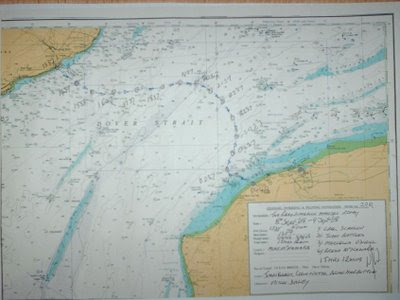 The chart showing our slow and painful progress - each X marks a changeover. 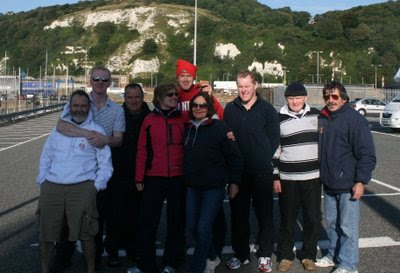 Back on terra firma, flushed with success - me (being throttled by) Darren, Philip, Marcella, John, Breda, Thomas, Tom & Mike (Clare was busy taking the photo).
News of our success spread quickly. Evelyn and Dave had congratulatory banners attached to our three mobile homes back at Varne Ridge Holiday Park (the only place to stay if you're going to do a Channel Swim). John Battles and Philip Mudge did a live telephone interview for the Gerry Ryan show and congratulatory texts and phone calls poured in. Some of us slept (I managed to get nearly 5 hours) and the celebrations continued when Evelyn and Dave brought a case of Stella Artois to Darren's mobile. 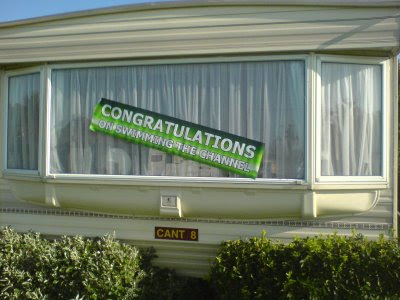 Evelyn and Dave's congratulatory banner on the mobile I shared with John and Tom.
Later, after trekking around Dover for 20 minutes, we found an Italian restaurant that looked inviting and were happy to take a party of ten on an otherwise quiet Tuesday in September. There was talk of a sing-song when we got back to the caravan park but I knew that I'd had enough excitement for one day and hit the sack.
Posted by Ennis Swimmer at 4:26 PM